The second TABADUL webinar took place on Monday 29 of November within the celebration of the First Mediterranean Day. The webinar focused on the interconnections between water, energy, food, and ecosystems- the so-called WEFE nexus, when reporting about climate change.

The webinar started with two short keynote speeches. The first one by Jihed Ghannem – public information officer at UNEP-MAP, who introduced some climate data and environmental degradation figures in the Mediterranean. The second keynote was held by Manfred A. Lange – professor at The Cyprus Institute, who delved into the WEFE nexus topic and gave some practical examples.

The webinar was followed by a panel composed by Aïda Delpuech – journalist at Inkyfada, Chantal Menard – communications specialist, Dania Al-Momani – member of Eco-Youth Jordan, and Lyse Mauvais – freelance journalist based in Jordan. The roundtable focused on the challenges faced when communicating about climate change and suggested tips and solutions on how to overcome them.

The Mediterranean, a hotspot region for climate change

Mediterranean countries are facing a set of complex and interrelated challenges that are increasing climate change vulnerability of the region. Jihed Ghannem, whom kicked off the session, stated it clearly: 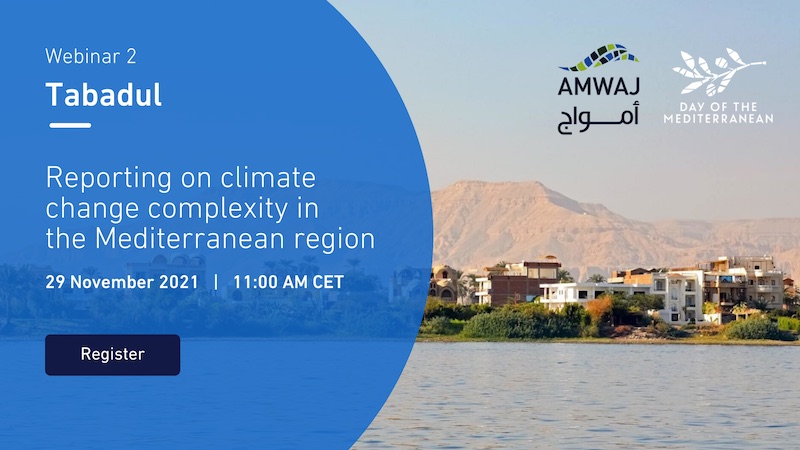 Call for Offers: Preparation of an Assessment on the Water-Energy-Food-Ecosystems Nexus in Lebanon
WEF Nexus
‘Improve climate data’ to tackle water security
Science Dev
Advanced solutions for agriculture: strategies for the Near East and North Africa facing climate change
CMCC