The Water-Energy-Food Nexus Webinar series was organised by the FAO, in collaboration with the Stockholm Environment Institute and KTH Royal Institute of Technology in Stockholm, with the goal of introducing nexus concepts and showcasing examples of current efforts and best practices in the Near East and North Africa (NENA) region.

Through this series, participants were able to gain an understanding of the importance of the nexus approach and learn how to identify nexus challenges, as well as recognising appropriate nexus solutions which contribute to sustainability, resilience, and water security. This series was developed from lessons learned in the regional project “Implementing the 2030 Agenda for Water Efficiency/Productivity and Water Sustainability in NENA countries” (WEPS-NENA) under the FAO-led regional Water Scarcity Initiative (WSI). Funding for this project was provided by the Swedish International Development Cooperation Agency (SIDA).

Solar-powered irrigation systems (SPIS) are widely used in arid regions such as the NENA region as a cost-effective means to support food production and sustain livelihoods. Irrigated agriculture plays a pivotal role for food security in this region, as surface water is often unavailable, making technologies that facilitate groundwater pumping particularly attractive. Because the cost of off-grid pumping is increasing due to the phasing out of diesel subsidies, the use of SPIS has become a more economically viable option for irrigation and is increasingly common. However, as SPIS becomes more popular, it increases the pressure on groundwater resources in the region leading to severe water overexploitation and threatening, among others, the future of agricultural activities. Integrated and cross-sectoral policymaking is necessary in order to address these challenges successfully. The session was conducted by two GIZ projects, the Nexus Regional Dialogue Programme* (NRD) and the Water, Energy for Food (WE4F)** programme. Speakers included Maria Ana Rodriguez (GIZ, NRD Team Leader), Irene Sander (GIZ, Adviser at NRD), Luca Ferrini (GIZ, WE4F Team Leader) and Stephanie Bilgram (GIZ, Adviser at NRD) as moderator.

SPIS in Tunisia and Morocco

The Nexus Regional Dialogues Programme conducted two studies on SPIS, with the aim of understanding the impact of the increased use of SPIS on groundwater and socio-economic development: 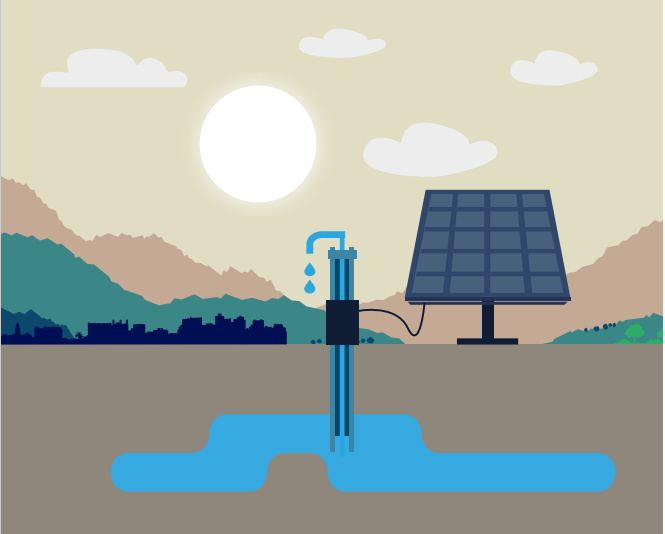