All You Need to Know About Renewable Energy in Jordan


Renewable energy systems have been used in Jordan since early 1970s. Infact, Jordan has been a pioneer in renewable energy promotion in the Middle East with its first wind power pilot project in Al-Ibrahemiya as early as 1988. In the recent past, Jordan has witnessed a surge in initiatives to generate power from renewable resources with financial and technical backing from the government, international agencies and foreign donors. However, renewable energy in Jordan remains largely untapped due to high cost associated with non-conventional energy resources and relatively cheap availability of oil and natural gas.

Wind energy is feasible mainly in areas overlooking the Jordan Valley and Wadi Araba. Solar energy potential is also high since many parts of the country experience between 300 and 320 days of full sunshine throughout the year, it also lies within the solar belt of the world. Biomass energy potential is also attractive in the form of urban wastes, organic industrial wastes and animal manure. With rapid technological advancements, other sources such as waste-to-energy, hydro power and geothermal energy are also realistic options.

Currently, Jordan is looking at having 10% of its energy mix generated from renewable energy sources by the year 2020. Thus, the country is implementing a plan to generate 600MW of wind energy, and 600MW of solar energy to reach this target. It is to be mentioned that Jordan’s renewable energy potential is certainly higher than this target, which may led to the possibility of exporting surplus renewable power within the region and beyond.

The solar energy potential in Jordan is enormous as it lies within the solar belt of the world with average solar radiation ranging between 5 and 7KWh/m, which implies a potential of at least 1000GWh per year annually. Solar energy, like other forms of renewable energy, remains underutilized in Jordan. Decentralized photovoltaic units in rural and remote villages are currently used for lighting, water pumping and other social services (1000KW of peak capacity). In addition, about 15% of all households are equipped with solar water heating systems. Recently, a solar pond for potash production was built in the Dead Sea area.

Jordan has major plans for increasing the use of solar energy. As per the Energy Master Plan, 30 percent of all households are expected to be equipped with solar water heating system by the year 2020. The Government is hoping to construct the first Concentrated Solar Power (CSP) demonstration project in the short to medium term and is considering Aqaba and the south-eastern region for this purpose. It is also planning to have solar desalination plant. According to the national strategy the planned installed capacity will amount to 300MW – 600MW (CSP, PV and hybrid power plants) by 2020.

Wind energy resources are abundant and can cover a significant amount of Jordan’s energy requirement if implemented properly. There are a number of places known by their high wind speed (greater than 5 metre per second) and long windy times, such as Jordan Valley and Wadi Araba. The existing wind farms in Hofa and Al-Ibrahemiya are good examples of successful wind energy projects.

These farms are connected to the national grid and characterized by a high availability and excellent capacity factors. Currently, there is a plan for three wind farms with maximum capacity of 300MW each, distributed among three sites in the northern and southern regions of Jordan.

Municipal solid wastes represent the best source of biomass in Jordan. The per capita of waste generated in Jordan is about 0.9 kg/day. The total generation of municipal waste in Jordan is estimated at 1.84 million tons per year. The main resources of organic waste in Jordan that can be potentially used to produce biogas are summarized as follows:

The Government of Jordan, in collaboration with UNDP, GEF and the Danish Government, established 1MW biogas plant at Rusaifeh landfill near Amman in 1999.  The Plant has been successfully operating since its commissioning and efforts are underway to increase its capacity to 5MW. Infact, the project has achieved net yearly profit from electricity sale of about US $ 100, 000.  The project consists of a system of twelve landfill gas wells and an anaerobic digestion plant based on 60 tons per day of organic wastes from hotels, restaurants and slaughterhouses in Amman. The successful installation of the biogas project has made it a role model in the entire region and several big cities are striving to replicate the model.

Click to email this to a friend (Opens in new window) 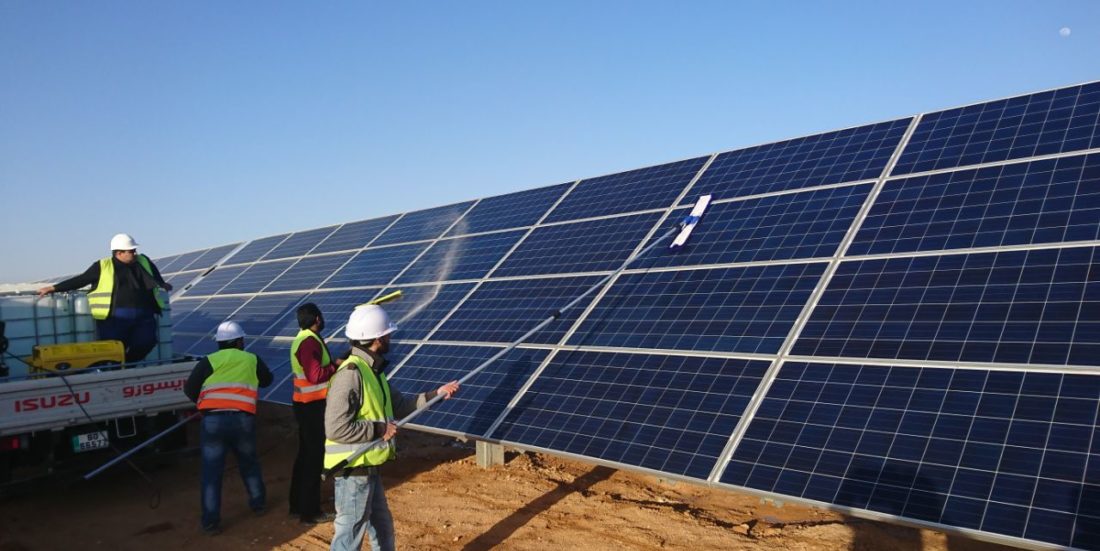